Department Message from the Chair

Message from the Chair

Welcome Back to the New Year, and the Spring Semester!

Vaccinations are ramping up, which means we’re starting to see some light at the end of our tunnel. I don’t want to be too dark at the start of the new year, but our situation now reminds me of something called the Stockdale Paradox. The Stockdale Paradox is named for Admiral James Stockdale, who survived being a prisoner of war. He said that the ones who didn’t make it through were the optimists, the ones who kept thinking it would soon be over. He said, “you must never confuse faith that you will prevail in the end – which you can never afford to lose – with the discipline to confront the most brutal facts of your current reality, whatever they might be.”

The brutal facts of our current reality are that the pandemic is at its worst, and worsening. We need to excel at another semester of remote work and remote classes, and we need to keep up our vigilance and safe practices in our lab spaces. We know we can do this. We’ve made it this far already. MCB did superb work with both its research and teaching in the fall, and we will do it again this spring. We can be cautiously optimistic that the vaccines are coming, but we also need to be prepared for delays and setbacks. We still have a hard road ahead, but we will prevail in the end.

We should also take some quiet satisfaction in the fact that the reason the vaccines have rolled out so quickly – in just a year since the first cases appeared in Wuhan – is because of science. The work that we do in MCB lays a foundation of basic scientific knowledge about how cells and viruses work at the molecular level. The Pfizer and Moderna vaccines are based on synthetic mRNAs encoding an engineered coronavirus spike protein, a remarkable new technology that’s built on an enormous and hard-won base of knowledge about immunology, RNA chemistry, structural biology, viral genomics, and computational biology.  Synthetic mRNA vaccines were pioneered in large part by Katalin Karikó, whose work was viewed as a scientific backwater, who was denied tenure and funding, but who persevered nonetheless because she believed that what she was doing was going to work. She was right. Everyone who works in a lab is intimately familiar with the idea of the Stockdale Paradox even if they haven’t heard of it – what we do day to day requires discipline and perseverance in the face of repeated failure, and faith that we will prevail in the end.

Discipline, patience, and perseverance are things we are already good at. We can all be proud of how we’ve weathered this difficult time so far. We still have some ways to go. We all look forward to the time – whenever it comes! – when we will be together again in person. 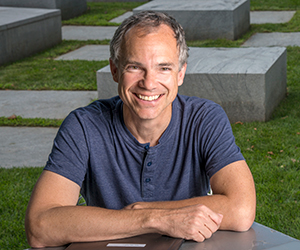